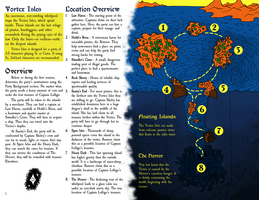 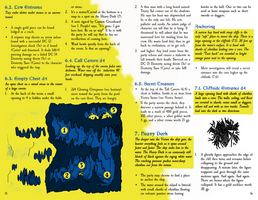 Get this zine and my past publications for $3/mo over at the Brooklet Games Patreon. For $12/mo you get a printed zine monthly!

Vortex Isles, previously only available on Patreon, has now arrived on itch.io! Pick up the adventure today!

You have learned the location of a great treasure, the lost hoard of legendary Captain Lolligo, who traveled the coasts long ago, violently pillaging countless towns before disappearing. The only problem: it is inside a giant whirlpool crawling with pirates.

Welcome Vortex Isles, a pirate-filled archipelago spiraling around a gargantuan vortex that is so dangerous that only those hiding from the law have settled here. Find a crew, steal a ship, and descend into the deep unknown in search of riches.

Jim Hall - Writer and Illustrator - Jim has published multiple adventures, including Titan Cliffs which is featured in Knock! Issue 3. His art can be found in the upcoming Against the Darkmaster adventure, Secrets of the Golden Throne, and Prismatic Wasteland’s zine, Barkeep on the Borderlands.

Sebastian Yūe - Writer and Editor - Sebastian is the author of the dark magic fantasy adventure Lake of Secrets for fifth edition and College of Celebrity: A Bard Subclass, also for fifth edition. Both can be found on the Dungeon Masters Guild. They also publish their own indie games to itch.io. They are an editor for UNCAGED: Goddesses and Incantations. Check out their website at http://sebastianyue.ca and follow them on Twitter @sebastianyue.

Seek the lost treasure of Captain Lolligo in a dangerous ever-spiraling vortex!